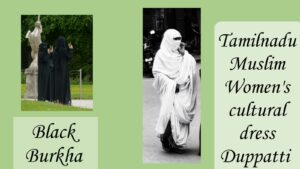 I’m not the Taliban kind of a Muslim. I love Malaysian style. I prefer women given the choices to dress the way they want within the limits set by God Almighty. Burkha is not the only public attire for the women. They may dress up in Sarees or Blazers too. A Saree with a long blouse, and a shawl over the Saree, while covering the head with Pallu is fulfilling the criteria of hijaab.

As long as they cover their body well, with modest appearance, all dresses are just fine. Simply screaming over certain cultural dressings is not a positive sign. Islam acknowledges the cultures of the world. To simply impose one culture over the world cultures is detrimental to the progressive thought of the Islamic culture. Islam is all inclusive. The idea of Hijaab is to cover the hair and all the bodily parts with enough clothes that would not make a woman look seductive before strange men from whom she has to avoid drawing attention from.

In a world where the commandos and the ninjas wear black clothes while covering all parts except the eyes, the immediate thought that comes to one’s mind when they look at a woman clad in black burkha with a niqaab is quite obvious. But if the same is designed to blemish the thought, then that will add positivity in the minds. For example, a black gown with a grey scarf or a sky blue scarf. Or a grey gown with a white scarf. People would look at these colors with a distinguished sense. And that’s gonna add value for such clothing in the European and subcontinent lands. By the way, the Muslim women during the Prophet’s time used to wear jilbaabs of various colors such as green and red. And that’s established in the proofs of the Sunnah.

I’m not talking against the complete black thing that is completely adapted in the middle east. My point is: What’s suitable to the middle east may not be suitable to every land. And there’s no mandate to dress in black. “Here comes the men in black” is restricted to only certain professions and cultures. Not for all. And the same applies to women.

And in certain cultures, the black color is used during the days of mourning when someone’s dead. And when they see black around on a fine morning, that gives a totally different sign to them. That’s human tendencies. For those who know little about the Ramanathpuram style of Tamilnadu, here is what the Muslim women used to wear there. They used to dress up in a Saree and drape themselves over with a white running cloth from head to toe. That white cloth used to be worn instead of the black burkha for ages. And even now we get to see in places like Keelakarai and Kayalpattinam.

I can even recall the style of the Bosnian Muslim women who have a typical style of wearing more of an English gown with short scarves and overcoat. That’s absolutely well within the Islamic injunctions. Islam flourished all over the world when people were left to adopt Islamic values within the cultures of their lands. And when people work to impose their cultures over them, then that backfires.

So my final words are: Burkha is a cultural dress that needs to be respected. But not imposed. Especially the Black color. Let people wear what suits their lands. And Muslims know what suits to maintain modesty. Malaysia for example has a culture of women there wearing some printed gowns and scarves. They look absolutely respectable on them. Their walk and gestures are also part of Hijaab. So if the women are wearing black coloured burkhas, that’s fine. But if they choose alternatives, that’s also equally fine, unless they imitate the unchaste ones of their lands.

Btw, these are thoughts of a Muslim who just has an opinion. It is surely not a fatwa. Guys do whatever suits best for you.

Temples Demolished In Karnataka Under The BJP Government Raises Questions

Black Burkhas May Work At Some Places. But Not At All Places.

People ask me: What are your thoughts on the Taliban?

ALHAMDULILLAH we found another success.