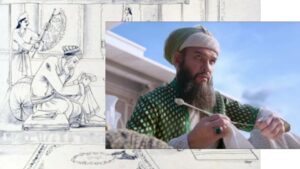 Aurangzeb, the king of Hindustan during the Mughal rule used to knit. He used to make caps and sell them even. He used to make embroidery for the carpets too. And these acts were done by men and women in his times in India. And even today the people of the eastern world find it as a universal act. Hence those who bring up the issue of knitting as an act of cross gender orientation is simply overstretched.

In all of these matters, the basic rule is, everything is halaal, unless proven haraam. There’s nothing in Islam to term knitting as haraam. The Prophet sallallaahu ‘alaihi wasallam used to help the women in household chores. He used to help cooking etc.

In today’s world we live, there are tailors and weavers, and those who do embroidery works in the factories amongst men and women. This profession or occupation is not limited to one gender. In fact in Indian schools, we were even taught to crochet. And there was nothing gender specific over it.

People who connect the act of men knitting to the promotion of LGBT culture is very vague. Can’t men help the women at home? Can’t men change the diapers of the children? Can’t they engage in planting and watering them? Can’t they engage in making their beds and making coffee for their wives? Aren’t these acts connected to Sunnah? Why do people get pulled into their own interpretation of halaal and haraam?

Women during the times of Prophet used to even take part in the battle field with bows and arrows. And they were surely not imitating men in that aspect. And the deen permits them. Both men and women have equal rights for all of these. And when people overstretch the matters, they make things hard over themselves.

These are matters of Ibaadah Gair Mahdah. All of these are permitted, unless the proofs for forbiddance cited as reference.

The knitting culture was also seen in the western world as a universal act. During World War I, men, women, and children knitted large quantities of clothing and accessories to help the war effort on the Allied side, supplementing the troop’s uniforms with socks, hats, scarves, sweaters, mufflers, and balaclavas. Knitting and women’s magazines along with the Red Cross published pamphlets and patterns specifically for sailors and troops. Popular magazines and songs treated knitting as a craze that had swept over Britain in the effort to support the military forces.

The stocking frame or the mechanical knitting machine was invented in 1589 by William Lee, an English clergyman. Men were the inventors of the knitting machines even. And there are thousands of men across the world, whose livelihood is based on knitting. If one term it as haraam, then that would harm their source of livelihood even. Hence I say, talk with proofs and evidences.

PEOPLE IN LIFE (Series) – Some things to tell about one of my Shaikhs, Shaikh Arshad Basheer Madani.

Fathima speaks to the donors | Case No. 180 | Fathima (pseudonym)

Is the wages for Cupping permissible, makrooh or haraam?