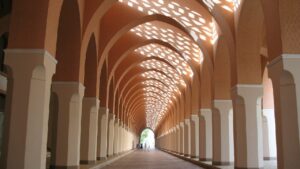 A Muslim man was travelling to a city, and as it happens to be a friday, he stopped his car to attend the friday sermon at a masjid on a Bangalore Hyderabad highway. To his amazement, the Khateeb – the preacher who was delivering the lecture said in his talk: All those who go to dargahs – shrines of dead saints, and seek their help are mushriks – polytheists. And they commit shirk – an act of associating partners to Allah. And one must not marry them. And the animals they slaughter are haraam for us to eat.

This man was enlightened about the matter of shirk. But was not aware of the other aspects of Da’wah – preaching, Islaah – reformation and other aspects of the deen – religion. As he returned back to his home, he spoke to his wife and asked her to stop visiting the dargahs. She refused. And he divorced her at once. Later he told her that his children will not inherit his property, since they are under the care of their mother. Then he stopped eating non-veg food in marriage valimas, since he considered all of those who slaughter the animals in his city as mushriks.

After some years he went through the same highway road and saw the same Khateeb of the masjid with his family in a restaurant. He goes near him and says Salaam. The Khateeb responds by saying “Wa’alaikumsalaam”. The man asks him: Shaikh, how come you are eating non-veg in this restaurant; the owners visit dargahs, and they are mushriks? The Khateeb said: Every person who visits dargah may not be committing shirk. And all of them are not to be termed as Mushriks. And all those who visit dargahs may not be necessarily committing shirk, unless they seek help from the dead ones. There is a difference between visiting those places and seeking the help of the dead saints.

The man was confused now. He narrated his story of divorcing his wife and separating from his family. The Khateeb said: What you did was based on some knowledge. Had you gained full knowledge, you would have worked on your family with hikmah – wisdom and corrected their affairs with love and clear knowledge – Baseerah.

The Khateeb goes on to say: My parents are still going to dargahs and indulging in matters of shirk. But I’ve never forsaken them; for my duty towards my parents is still an obligation. I maintain good relations with my relatives and friends who commit shirk. For that is also a duty on every Muslim. And this nature of mine has made way for many amongst my relatives to give up shirk. And next week my parents are going to Makka to perform ‘Umrah? And I pray that they understand Tauheed – monotheism when they go there In’shaa’Allaah.

The man after hearing to the Khateeb said: Maulana, you haven’t understood the deen – the religion well. How can mushriks enter Kaaba? Your parents should not be allowed to go for ‘Umrah, if you knew Islam well. And I wonder how the Saudi government allow such mushriks to masjid al haram – Kaaba. And you’ve become a Mushrik too, since you are not considering a Mushrik a Mushrik.

Days passed. The parents of the Khateeb returned from ‘Umrah. And now they returned with Tauheed in their hearts. They shunned visiting the dargahs to seek blessings. On the contrary, the oldman, the Khateeb’s father started to visit the graveyards to say Salaam to the dead and make dua for their magfirah – forgiveness. And that is an amazing Sunnah of the Prophet sallallaahu ‘alaihi wasallam.

And now, the man again meets the Khateeb and his entire family who are now Muwahhideen, Monotheists in Islam, praising and glorifying Allah at every instance. And he learns about all the transformations. And at that point in time the man said to the Khateeb: I wish I could meet my family too. I wish I had taught them the deen with patience and kindness. I wish I had learnt the deen from you before taking those drastic decisions.

The man goes in search of his wife and children, until when he finds that his divorced wife is married to a practicing Muslim, who is a strong Monotheist. And she and her children also stopped visiting dargahs and shrines for seeking blessings.

After seeing this change in his previous wife and children, the man says now: QaddarAllah wa maa shaa fa’al. Allah’s decree. And He does what He wills.

Moral of the story:
At times, there’s no one way to deal with people. Everyone is unique. And every story has multiple lessons. What appears right may not be right at a longer run. And what appears failure, may be a source of success in the hereafter. For the Judge on the day of judgement is the Most Just One. So let Him be The Judge to decide the final destination of every man, while we encourage each other to follow His commands. And gain knowledge, while also knowing the ways to apply the knowledge.