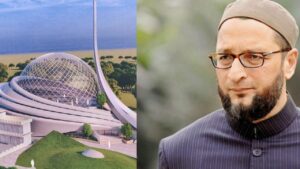 Recently AIMIM’s chief Asaduddin Owaisi brought-out another controversy by saying that the Muslims must not pray in the land in Ayodhya, where the masjid will be built along with the hospital by the side. This is the masjid that is getting built at the land where the government approved the construction of the masjid, based on the Supreme Court’s verdict. The 5 acres land for the masjid was given as a compensation for losing the 2.67 acres of the Babri Masjid premise. Asaduddin Owaisi has even said that the ones who are constructing the masjid are Munaafiqs – hypocrites. He also said that the donation for constructing the masjid is also haraam – forbidden.

The simple questions to Asaduddin Owaisi:

1) When the Prophet of Islam, Prophet Muhammad (sallallaahu ‘alaihi wasallam) said that the entire world is a place of sajdah – prostration, and that the Muslims can pray all over the world, then how can anyone term the praying in the masjid in Ayodhya haraam – forbidden?

2) Although many don’t feel happy about getting an alternative site for the masjid, they simply want to end the dispute with the Hindu community. Hence they are considering the upcoming masjid to be as part of the decree of Allah. Even if they are wrong in their judgment, should we term them as Munaafiqs – ‘hypocrites’ for working to bring about peace? When a person terms other Muslims as Munaafiqs, that means he is accusing them of greater Kufr – disbelief or rejection of creed. Does Owaisi have clear proofs for that in the light of the Qur’an and Sunnah?

3) How is that he takes the name of ‘All India Muslim Personal Law Board’ while giving his personal opinion, while the AIMPLB has not given any official statement in this regard to this effect? Has the AIMPLB used words such as ‘haraam’ and ‘Munaafiqs’ as Asaduddin Owaisi has used?

4) When there can be Ijtihaadi differences amongst the Muslims, aren’t we supposed to respect each other, even if we disagree with each other? Ijtihaad is the process of deriving rulings based on the principles laid out in the principle of fiqh – Islamic jurisprudence. And the Mujtahids – in this context, the learned scholars who exercise their right may differ with other scholars. No wise scholar will ever term the one who gives an alternate opinion to be a Munaafiq. On what basis does he apply the term Munaafiqs to the Muslims who hold another opinion?

5) To cite the reference to Masjid Al Dhiraar – Masjid of dissent, that was demolished during the time of Prophet Muhammad (peace be upon him) in relation to the masjid in Ayodhya is not reasonable. Prophet received wahi – inspiration from Allah about the plan of the hypocrites who wanted to use that masjid to divide the muslims for their ulterior motives. I’m sure Asaduddin Owaisi can’t claim to get wahi. So how can he compare the masjid in Ayodhya to masjid Al Dhiraar?

6) Quite a number of Muslims in Ayodhya have accepted the verdict of the Supreme court, and they want peace now. They frel they have got enough masjids to pray. Now they want some space and time to do some business and educate their children. Unrest in society leads to greater miseries. Should we work to disrupt their dreams? The issue of Babri Masjid is in the court. If the court gives the land of dispute to build the masjid there, we will all be happy at that ruling. But since we can only do the best with what we have, what’s the logic behind rejecting the land given through the Supreme court?

7) We condemn the demolition of the Babri Masjid. We also hope to get the disputed site back for the masjid itself. But then we must not be accusing other Muslims of hypocrisy, for doing an act out of their knowledge and intention. As the Prophet (peace be upon him) said: Rewards to the deeds are based on intentions. And people will be judged by their intentions. How can we accuse others of hypocrisy, while we don’t know the matters of the hearts?

8) In the democratic setup everyone has their right to exercise. The AIMPLB has the right to make another petition at the Supreme court to get the disputed site back for the masjid. If they succeed there, we would congratulate them for that. If they don’t succeed, we will still admire them for their long legal battle in the pursuit of the rights. We are not against those who want to get the land back for the masjid. But we must accept the reality on ground and make the best out of what we have. Sometimes peace is established by forgoing one’s rights. The Prophet (peace be upon him) displayed that while he made the treaty of Hudaibiyah. He and his companions had the right to do Umrah – a lesser pilgrimage to Makkah, when they set out with the intentions with the Ihraam – a ritual to perform pilgrimage. But when the idolaters or Makkah stopped them and insisted to go back after making a peace treaty, the Muslims went back to Madina with heavy hearts, just to establish peace with the unjust idolaters of Makkah then. Isn’t the Prophet’s example there before us?

9) If the petitioners amongst the idolaters of India want to demand similar masjids for their temples, then the process of our endeavour would be through legal cases in the courts. And we are in a position to abide by the court or file petition after petition. If the court wants to give alternate sites for the existing masjids of dispute, and if the local people choose that as an alternative for peace, then I feel we must just move on. The onus is upon the government to give larger land for the construction of the masjid. Although there are no explicit proofs for the specific demolition of temples at the disputed sites, there are enough records to say that the Mughals have demolished many temples in their times, as part of that times political nature of conquering territories of the warring kings. I agree that there’s no explicit proof against the disputed sites. But theres some kernel of truth to the demolition of temples. Hence the law of the land today shall be followed, and leave the matter to the court to decide. If you claim to abide by the law of democracy, then you must take this bitter pill as well.

10) India is still Daarul Ahd and Daarul Sulh – a land where the Muslims are living under certain agreements to hold peace between a pluralistic society. India is not a Daarul Harb – a land of war. Hence all the rulings that are applicable for Daarul Ahd has to be followed in India now, to allow peace to breathe in the society. Our enemies may construe to disrupt peace. But we must show our courage through the perseverance to establish peace with hikmah – wisdom that was elaborated by our Prophet (peace be upon him).

So my advice to my dear brother Asaduddin Owaisi is: Please don’t label Muslims as Munaafiqs. And don’t use words like Haraam on things for which you can’t establish proofs from the Qur’an and Sunnah. But do all the things possible to express your thoughts and pursue your rights. We deem you to be a good Muslim. And I will not stay quiet when anyone accuses you of being a hypocrite. We are Muslims. Let’s share our Islamic brotherhood and love amongst ourselves first. Thanks for reading.