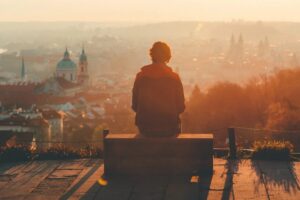 The only person on Earth whose humanity encompassed all people-irrespective of their race, religion, caste, gender, class, colour etc.
In fact, it extended even to the animal and plant kingdoms.
Truly, he(PBUH) was ‘Rahmat-ul-Aalimeen'(Mercy for mankind, jinns and all that exists).

The Prophet Muhammad(PBUH) has already set a precedent when it comes to humanity – on a universal basis.
Nations before him and nations after him weren’t able to do justice to this one aspect. Ever.
Qays ibn Sa’d reported: A funeral passed by the Messenger of Allah(PBUH) and he stood up. It was said to him, “It is a Jew.” The Prophet said, “Was he not a soul?”
In another narration, the Prophet said, “Verily, you stand to glorify Allah, who is the receiver of souls.”
(Source: Ṣaḥīḥ al-Bukhārī 1250, Ṣaḥīḥ Muslim 961)

Most of the socio-political, socio-economic and socio-cultural issues plaguing the society today, can be resolved permanently if only the leaders reflect upon the humanity of Prophet Muhammad(PBUH) in an unbiased manner.

No one is forcing you to follow Islam, just inculcate the precepts of humanity and make this world a better place to live in.
For people. For animals. For plants. For every living being.

Toxic Discussions Are Hazardous To Growth

Who are the people of Amazing Faith?

Why care about the humanity of Prophet Muhammad (PBUH) ?